A Piece on Pipes 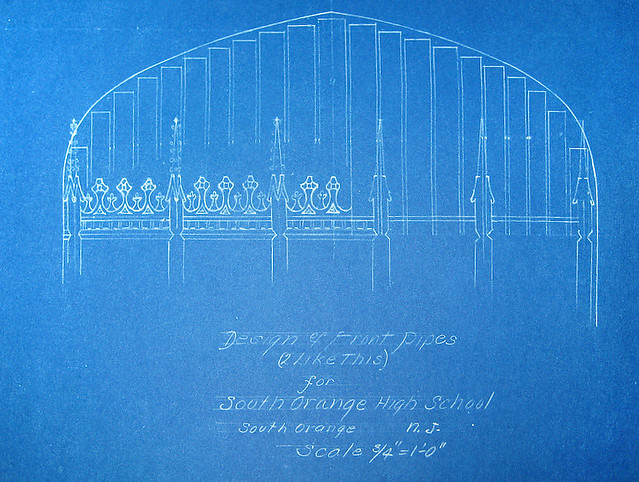 From John Elwood, who has been leading an astounding—and successful—effort to restore a grand old pipe organ from a Guilbert & Betelle classic:

Some Guilbert and Betelle schools have unusual features.  We’ve seen the greenhouses, the swimming pools, the observatories, and even the airplane shops… but in terms of sheer lavish expenditure in a public high school, it’s pretty hard to beat a pipe organ.

At least four Guilbert and Betelle high schools had pipe organs:  Columbia of Maplewood and South Orange, Kearny, Central of Newark, and Great Neck.  An organ in a public high school might seem odd, but at the time it wasn’t that unusual.  For example, something like thirty high schools in New York City had pipe organs.  Most of high school organs were fairly run-of-the-mill types, built by quality, if middle class, firms like Estey and Moeller… the organ equivalent of the Conn or Oscar Schmidt rental instrument you may have used in the high school band. Columbia High School, it seems, decided to be a little different.  Instead of getting a merely a good quality serviceable organ, they bought themselves a Skinner Organ.  Skinner owned, lock stock and barrel, the prestige organ market.  They were not shy in self promotion, claiming in one advertisement for Skinners in schools, “To equip a school or college with a Skinner Organ is like putting a Stradivarius in the hands of the youthful violinist.  No greater inspiration could be given.  So with the Skinner Organ in school and colleges!”  So it’s not exactly “Plop plop, fizz fizz, oh what a relief it is” on the catchy scale, but the accompanying list of colleges with Skinner Organs, (like Harvard, Yale, Princeton, UVA, Cornell, Stanford) really proved that Skinners were for people trying to prove something.  Skinner sold his organs to everyone from Vanderbilt, who put one in Biltmore, to the Rockefellers, who had more than one!  And of course, Skinners could be found in a ridiculous number of large churches, cathedrals, and synagogues.

Many decades later, it turns out the rich gits with their Skinner organs were on to something.  Skinner organs, while reviled in the 60’s and 70’s, are among the most revered today.  Unfortunately, a large number of these organs were scrapped or modified when they weren’t exactly in style. But a few are still around.  Of the 400 organs recognized by the Organ Historical Society as historic, twenty five are Skinner organs.  They’ve become the Stradivarius of early 20th century organs.

So what happened to CHS’s Skinner?  Well, around 1965, they mostly stopped using it.  Fortunately, it’s been in a time warp since then.  Plans for restoration are afoot.  If you want to know more about the CHS Skinner organ, visit www.chsorgan.org